This site is meant to provide a clear and simple — but extremely general — overview for folks looking to walk the various UNESCO recognized pilgrimage paths of the Kumano Kodo.

This site is in no way comprehensive, authoritative, or possibly even accurate! It was produced by Craig Mod as a way to "formalize" and "store" some of the data from his walks around the Kii Peninsula. The main purpose of this is, if anything, to point to other, more comprehensive, up-to-date, official resources.

(Basically, this is a page Craig wishes had existed when he started looking for information on these walks.)

That said, perhaps of most interest are the .gpx route files down at the bottom of this page. They sketch out several potential Kumano hikes. Feel free to download them and load them into your map apps bearing in mind they may not 100% reflect official routes.

For general walking-in-Japan related notes and essays, you might want to check out Craig's Ridgeline newsletter.

If you feel that this page is missing a resource, please email [email protected] with the suggestion.

The three most-walked routes of the Kumano Kodo are: The Nakahechi, Kohechi, and Ise-ji.

The most popular route is the Nakahechi, which runs from Takijiri-Oji to Hongu, and then from Hongu down to Nachi Falls. If you're not a seasoned mountain-person, it's advisable to begin with this route, as it has the best infrastructure, most available literature, and safest paths of the core Kumano walks.

The Ise-ji is also a superb option, significantly less crowded than the Nakahechi, and more easily accessible with cute little train stations tucked into coves at almost every section. It allows you to combine a visit to Ise Grand Shrine with UNESCO certified mountain paths and coastal views. I published a 15,000 word digital book about the route in 2020.

The Kohechi is an excellent, much more difficult route but carries the advantage of connecting directly with Koyasan, the home of Shingon Buddhism. It has the least infrastructure, fewest inns, biggest climbs, and is more remote and therefore difficult to get help if something happens mid-walk. Advisable only for seasoned walkers.

Keep in mind that Hongu Shrine and the Nakahechi and Kohechi routes are fairly remote, and access from Tokyo is considerably more involved than, say, popping over to Kyoto on the shinkansen.

The full Nakahechi walk will take a good five days at a reasonable clip. If you want to spend a little more time exploring around Hongu and, for example, take a day off at Yunomine Onsen to bathe in their World Heritage bath, or pop over to Kawayu and take a bath in a river, you'd benefit from six days. The more time you have, the better. There's always more to add on. One could easily spend a month and still not hit all the trails.

For the Nakahechi, we highly recommend Brad Towle's Official Guide Book which you can have shipped to you in advance of your trip. (Sadly there isn't a digital edition.)

Tanabe City runs an excellent website which we recommend for all non-Japanese speakers to book their accommodation. As it stands, because of the increase in popularity on the Kumano, finding last minute accommodations during spring and fall can be exceedingly difficult. The sooner you can book, the better. Folks often book six months or even a year in advance during high season (March, April, May; September, October, November). 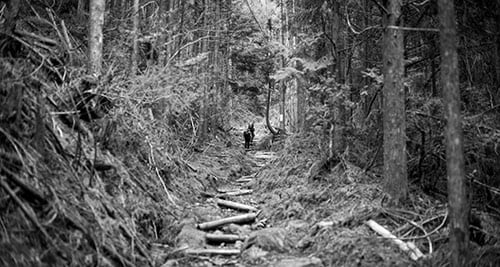 Koya Bound is a book of photographs produced by Craig Mod and Dan Rubin in 2016. It chronicles eight days of walking on the Kumano Kodo.

Dan and Craig produced a companion website with walking data and diary entries and an interactive map that used to live at this current page. It's still nearby. The companion site is now here:
https://walkkumano.com/koyabound/

The three sacred sites of Kumano Sanzan, Koya-san, and Jingu (Ise Grand Shrine) are at the heart of Japanese spiritual identity. All have been major pilgrimage destinations since ancient times. Kumano Sanzan is representative of the syncretic nature of Japanese religion, open to all, welcoming to women, oblivious to class, and with a strong background in Shungendo nature worship. Koya-san was a male-dominated centre of esoteric Buddhism, one of two of the most sacred Buddhist sites in Japan. And Jingu (Ise Grand Shrine) is the most important site in Shinto, with its enshrined deity being Amaterasu Omikami, the Sun Goddess and ancestral kami of the Imperial Family.

Kumano has been the main centre of Japanese pilgrimage for over 1000 years. The pilgrimage route is not an easy one through isolated mountains but it affords the pilgrim an opportunity to commune with nature, including large forests and clear rivers, and indeed many of the natural features along the way are considered to be deities. These are the locations where the deities descended and resided. The sacred mountains of Kumano were considered otherworldly. They were associated with death and afterlife, and a visit there was equated with one's own death, then rebirth and renewal. Even today a walk through the Kumano mountains can revitalise and restore.

Kumano was initially associated with nature worship and the ascetic practices of the Shugendo practitioners. Steeped in Old Shinto tradition this is where Susa-no-o, the Shinto God of Storms, came to rule the underworld. After the introduction of Buddhism in the 6th century the belief systems of Shugendo, Old Shinto and Buddhism combined and adapted and became highly syncretic in the Kumano region. Susa-no-o, the main deity at the Hongu Grand Shrine was seen as a manifestation of the Amidha Buddha. Kumano was the Amidha Buddha's pure land where pilgrims could be reborn.

During the 11th Century, a time of "Mappo", "the Age of Dharma Decline" or the third "degenerate" stage of Buddhism, pilgrimage became popular among the Imperial courtiers. Indeed the world was coming to an end for the aristocrats of Kyoto and they would soon cede power to the warrior class who would rule for the next 650 years. Over the next 200 years there would be over 100 Imperial visits to Kumano. The roads and facilities on the Kumano pilgrimage route improved accordingly. And then at the end of the 12th Century authority was rested from the court in Kyoto and assumed by feudal authority in Kamakura. Imperial pilgrimages ceased.

In the 14th and 15th centuries courtiers were replaced by warrior pilgrims. As the country descended into civil war in the 15th and 16th centuries victorious warriors would visit Kumano to make donations. As the country was consolidated under the peaceful Edo Shogunate in 1603, interest in pilgrimage to Jingu (the Ise Grand Shrine) increased. In response to its declining popularity, the Kumano Shrines dispatched nuns (bikuni) to travel the country popularising the Kumano pilgrimage. This spread interest in Kumano from the samurai to the general public including farmers, merchants and artisans.

In 1868 the feudal system collapsed under the Meiji Restoration and strict measures were introduced to control religion. Syncretism was banned and the supernatural beliefs of Shugendo were banned altogether. Kumano chose to be Shinto and all Buddhist images in the Hongu Grand Shrine were destroyed. Later in the 20th century cultural protection laws assisted with protecting the cultural assets of Kumano. The area saw a drop in pilgrims before WWII but recently the UNESCO Heritage listing has ensured that interest has rekindled in pilgrimage to Kumano.